Thanks for attending our production of THE QUE FUNNY! Comedy Tour! We look forward to seeing you at the next one!
BUY TICKETS
Carrollwood Cultural Center
Sat. September 18th 2021, 8:00 pm

About THE QUE FUNNY! Comedy Tour 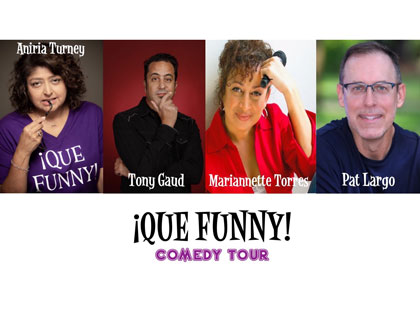 The ¡QUE FUNNY! Comedy Tour is a show featuring Latinx comedians alongside other diverse comics for night of storytelling and laughter. Some of these talented performers have appeared in comedy festivals such  as the Burbank Comedy Festival, the Oddball Comedy Festival, and Comedy  Central’s Open Mic Fight to name a few. They have also opened for the likes of Paul Rodriguez, Craig Shoemaker, and Dom Irrera.

Every ¡QUE FUNNY! performance is designed for audiences over 18 years of age.

At the Carrollwood Cultural Center, magic is around every corner. Music fills the air, colors dress the walls, dancers float on stage and drama evokes emotion. The Center has been honored to host an array of local talents from visual artists, instrumentalists, singers, dancers and theatre groups. We look forward to introducing more area talent through future performances and concerts. Who knows? Perhaps our next headliner will be you!